“The Magic Dog” is a custom commissioned work in sterling silver and vitreous transparent enamel.  It brings together various breeds of dogs in one piece, and is intended visually to demonstrate that the Gray Wolf is the source of all our huge variety of domestic dog breeds.

At the request of the client, Kristin began sketching many breeds of dogs to fill the outline of the wolf.  She then did studies of the wolf’s face, and the Cavalier King Charles Spaniel.

At this point in the piece’s development, Kristin realized that there were two distinct types of dogs around today.  There are the modern breeds, and there are still existing some of the ancient breeds that hunted with their masters, guarded flocks and homes, and went to war.  Kristin felt that representing only the newer breeds was unfair to the ancient working breeds that have served humans for millennia, and are the foundation for the newer breeds.  She approached the client with the idea of making the piece two-sided, with one side representing older breeds, and the other the newer breeds.  The client accepted this idea, and so the piece evolved into separate but joined pieces.

The reverse side showing the ancient breeds is based on the Husky, and incorporates the Caucasian Ovcharka, Saluki, Kuvasz, Basenji, Saluki, Tibetan Mastiff, Turkish Kangal, Shar Pei, and Basenji.

The moonstone represents the passage of time.  The great circle framing the figures suspends from a swivel, allowing the piece to be reversed while being worn.

This piece is a tribute to dogs.  They have helped us to survive in many times and many climates, and they love us unconditionally.

The stone in the piece is a particularly beautiful example of a Moonstone.

The moonstone, characterized by an enchanting play of light, is in itself an interesting and ancient gemstone.  Its name is derived from the visual effect, or sheen, caused by light reflecting internally in the moonstone from the different feldspar layers inside the stone.

Moonstone has been used as jewelry for centuries, including ancient civilizations. The Romans admired moonstone, as they believed it was born from solidified rays of the moon. Both the Romans and Greeks associated Moonstone with their lunar gods and goddesses.

This is actually a different stone, labradorite, found in Sri-Lanka and marketed as Moonstone or “Rainbow Moonstone”. 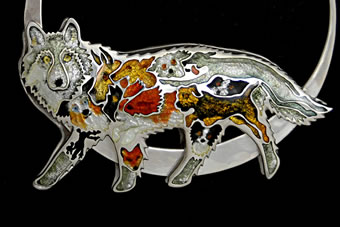 The Magic Dog - Side One 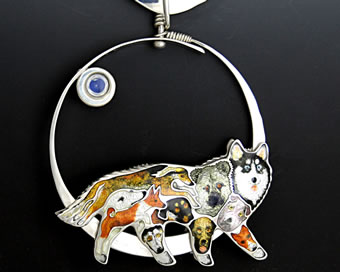 The Magic Dog - Side Two

The Magic Dog - Side Two Up Close

Contact Kristin through this website to discuss any ideas you have about your own personal hand crafted work of wearable art and Kristin will work with you to make it a reality.